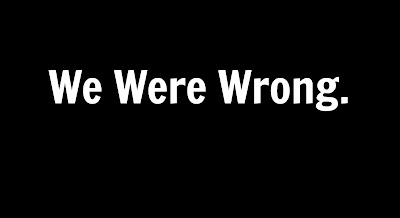 As I write this, the final tally has not yet been made in the 2016 Presidential race. I don't yet know who the winner will be, but it is looking very likely that come January we will be inaugurating Donald Trump as the next President of the United States.

If that happens - or even if, in the wee hours of the morning, Hillary pulls off a miracle - we have to face the fact that we (the educated, the elite, the professionals) have been wrong about so very much in our politics:

• We were wrong when we said that "the Party decides". Most of the GOP establishment turned on Trump, and he won anyway.

• We were wrong when we said that elites matter. Clearly, nobody is listening to any of the elites, regardless of their party or position.

• We were wrong when we assumed that elections are about Liberal and Conservative ideologies. Trump is no more a conservative than I am a turnip, yet he carried Republicans, and a good many "independents", anyway.

• We were wrong when we said that money controls politics. Clinton out-raised Trump by a 2:1 margin. Ironically, liberals who have been wanting to get the influence of "big money" out of Presidential campaigns just got their wish - whatever else is true, Trump is not especially beholden to Wall Street or the usual Big Money interests.

• We were wrong when we said that character matters. No matter what one thinks of Clinton's character (a subject of much dispute), Trump's is on display. He is mean, vindictive, small-minded, arrogant, and petty. He has practically embodied the seven deadly sins in his life.

• We were wrong when we said that Evangelical Christians would never vote for a twice-divorced, twice-cheated, philandering lecher who runs gambling houses for a living. Apparently, "values voters" was a myth.

• We were wrong when we thought that we could use sophisticated polling techniques to predict electoral outcomes. People point to the Brexit outcome, but that was only a 4-point miss. This was a failure of epic proportions.

• We were wrong when we said that competence and capability matters, that someone utterly ignorant of public affairs could never get elected.

• We were wrong when we said that Republicans could no longer win the White House solely on the backs of whites. Clearly, they can.

• We were wrong when we argued - as I used to teach my US foreign policy classes - that only 20% of the US public is isolationist, that everyone else has accepted internationalism in one form or another. Isolationism appears to be closer to 50%.

• We were wrong when we argued that truth and reality matters. So many people believe things that are so obviously false - that trade is bad for our economy, that global warming is a myth, that complex problems have easy solutions. Richard Feynman was right - nature cannot be fooled. But apparently, a great many Americans can be. For those who hope that the truth will defend itself - maybe the Constructivists were right. Maybe people really DO make their own realities.

When we are wrong, we need to reexamine ourselves. What did we miss? What did we fail to understand? We have a lot of soul-searching to do.

In the meantime: in the morning I will get up early, as I always do. I will take care of my family, exercise, go to work. I will try hard, as I do every day, to be kind to those I work with and for, to love others as God loves, the follow the Good. The universe has not changed because of one election. Love is still love; compassion and mercy are still what they were. God is still God, and we are still who we were yesterday and will be again tomorrow. Circumstances will change, but we are who we are.
Posted by R. William Ayres at 1:23 AM