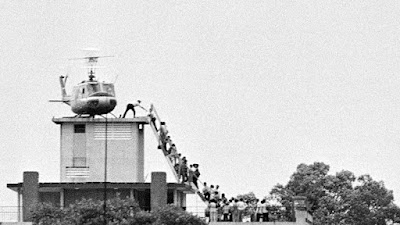 Much has been said and written in the last 48 hours about the sudden collapse of the government of Afghanistan in the face of the Taliban offensive. A great deal more will be said in the coming days and weeks, much of it predictable. Republicans will blame the Biden Administration, never minding the previous President's negotiated deal to do exactly what has been done. Democrats will try to deflect blame, and wring their hands, and talk about how there were no good options. And everyone will out-do each other praising our brave men and women in uniform for their tremendous work, even though it didn't turn out very well in the end.

That last part - the bipartisan agreement that our armed forces are to be praised no matter what - is the direct result of the last time we saw this movie play out. In the mid-1970s, Vietnam veterans returning home were widely vilified in the face of reporting on the war (the My Lai massacre in particular) and the general sense that America has "lost" the war. In retrospect, we regretted taking out our anger on our troops. Ever since, we've gone rather in the other direction.

Regardless of that difference, this is very much the same story rebooted. The United States attempted through force of arms to create a political situation in an underdeveloped country far away over the course of decades and through several Presidential administrations, both Democratic and Republican. Eventually the effort collapsed in failure.

There will be much discussion in the coming weeks and months about how this happened, in an effort to learn our lessons anew. We had much the same discussion after Vietnam. History suggests we won't do much better this time around.

One idea from our last go-round deserves to be heard again. In the early 1970s, as it became clear where the Vietnam war was headed, Daniel Ellsberg wrote a piece he titled "The Quagmire Myth and the Stalemate Machine". In it, he laid out a fairly straightforward argument. What we were told about that war (and, by and large, what many Americans came to believe) was that Vietnam was a "quagmire" - a bog that looked like solid ground until you actually got into it. And once you stepped in, every additional step sucked you in a little deeper, until eventually we became stuck. The idea was appealing, because that suggested that the war wasn't really anybody's fault - everyone was doing their best based on what they knew at the time.

Ellsberg argued that this was patently false. As an insider in the Pentagon during the war, he knew that the civilian and military leadership knew from very early on what the likely consequences of each step were. They knew there was no "victory" around the corner, even as they continued to say that there would be. This was no quagmire.

Why, then, did American leaders lead us knowingly into a disaster? Here Ellsberg constructed a surprising answer. It wasn't the mendacity of our leaders (as much as he criticized them). It was our fault - the fault of the American public. The "stalemate machine" he referred to was the engine of American politics and public opinion, in which elected politicians were hemmed in by two forces: Americans would punish any politician who allowed us to lose a war, and they would punish any politician who cost us too much in lives and money. These are, of course, contradictory forces, and eventually reality on the ground produced the ending that was destined from the beginning. What administrations from Eisenhower to Kennedy to Johnson to Nixon had done was simply kick the can down the road, doing just enough to not lose while not costing too much.

The same logic has been operating for the past 20 years in Afghanistan. We managed to keep the number of casualties far lower, but spent about the same amount of money (as of 2021).

As we've learned in many ways, Americans don't like being told that there are things we can't do. Part of our cultural DNA is that nothing is impossible. Unfortunately, using military force (alongside some development work, to be sure) to remake an underdeveloped country halfway around the world in our image IS impossible.

In the coming weeks and months, Republicans will blame Democrats and Democrats will blame Republicans. We will argue, fruitlessly, about whose fault all of this is. We are unlikely to arrive at the right answer, the answer Walt Kelly (in a very different context) gave us shortly after the Vietnam War ended: We have met the enemy, and he is us.