Not Every Victory is a Victory

The title of this piece was quoted to me by a friend. We were discussing a situation that seems common these days: a public negotiation that has become a game of Chicken.

For those not familiar with the game-theory construct of Chicken, it's a two-player game in which each side tries to get the other to concede first. The typical narrative is two cars racing towards each other head-on. The loser is the one that swerves out of the way first to avoid a collision. One "wins" at Chicken by convincing the other side that your side is willing to risk total destruction if you don't get your way. In game theory matrix terms, Chicken looks like this: 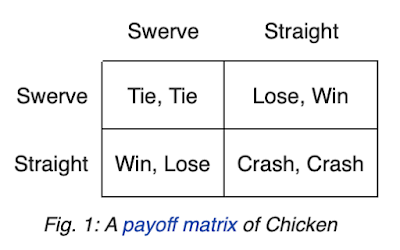 If one player swerves (gives in) and the other doesn't, there's a clear winner and a clear loser. If both swerve, there's a tie but neither wins anything. Both continuing straight ends in disaster.

The recent budget negotiation between Congress (in particular, Congressional Democrats) and the White House could be modeled this way. Indeed, many did characterize the period of the shutdown as just this kind of test of wills - who would "swerve" first? And it seems that both sides saw themselves as engaged in Chicken, as both engaged in various commitment behaviors to try to convince the other side of their willingness to risk a Crash.

In this narrative, the Democrats "won" and the President "lost", because he was seen as swerving first (by agreeing to reopen the government without border wall funding). This game may get replayed again in three weeks - we'll see what happens in the next round, if there is one.

On the local level, I've been watching a similar Chicken game at my former employer. Tenure-track faculty (represented by an AAUP chapter) have gone on strike against what they regard as an unfair, imposed contract (18 months of negotiations failed to produce an agreement). Both sides have dug in, although the last couple of days have seen negotiations that may bear fruit.

The problem with applying the Chicken game framework to real-world situations isn't that it doesn't capture the dynamics of the two sides. The artificial model misses out on important parts of reality. Two real-world dynamics, in particular, are missing from the matrix. And when we forget about these things, then what we might think of as a victory really isn't.

First, as with most game-theory constructs the Chicken payoff matrix is set up as a single-play game. The "racing cars" metaphor is a one-time event - players play, there's an outcome, you're done. But life is not a single-play game - life is an iterated game. In most cases, you will interact with the same people tomorrow that you interact with today. Regardless of the outcome of a particular game, the choice of game itself and the strategies in it impact the relationship.

This is where Chicken is particularly problematic, because Chicken destroys relationships. In order to be willing to play Chicken at all, you have to take the position that you would rather die (or suffer horrifically bad consequences) than let the other side win. Once you make that statement, the other side will likely never trust you again. Playing this game at all - regardless of the outcome - largely closes off future opportunities for cooperation, because who would cooperate with someone with that value structure?

The Federal government shutdown was a classic example of this. 800,000 federal workers, and perhaps more than 1,000,000 contractors, went without paychecks for a month. The latter group will never recoup that lost money. Regardless of who "won", those people all lost. And that's not counting the ripple effects throughout the economy, as spending dropped and families became anxious. Standard & Poor's estimated that the shutdown evaporated about $6 billion from the US economy.

A faculty strike has the same dynamics. Yes, faculty who strike do suffer (unless the union has built up a Strike Fund, they go without pay for some period of time), as does the administration (which must scramble to figure out how to cover or substitute classes). But the real losers are the students. If you take seriously that what faculty do in the classroom matters, then some number of students are being robbed of the educational opportunity for which they have paid and arranged their lives. The longer the strike goes on (it's now into its second week as of this writing), the greater that cost is. A "crash" scenario means that some could lose the entire semester, setting their lives back by six months at least.

This is why even the "winners" in Chicken aren't really winners. There are no heroes in this game, only tragic victims and fools. As the movie War Games put it so many year ago: