Is a Thug Just a Thug? Or Is a Thug a Child of God? 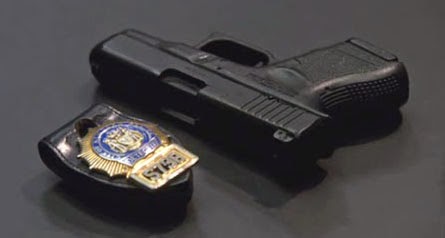 It's been an eventful few months in communities around the country as we try to come to grips with issues of race, poverty, violence, and policing. Tragic deaths of both civilians and police have become touchpoints for national conversations, which is (kind of) a good thing. Not all communities have problems between police and population, but too many do.

As is typical, the "public" conversation - by which I mean the conversation carried in major media outlets among "the chattering classes" - has been largely polarized along political lines. While there was some hope that the choking death of Eric Garner might rally some conservatives/Republicans to the cause of tamping down excessive use of force by police, the shooting death of two cops in NYC on the heels of a Democratic mayor's participation in anti-violence protests largely destroyed that prospect. For the most part, what I see is self-identified conservatives lining up to defend the police while self-identified liberals to varying degrees call for police reform and justice for recent civilian victims (Michael Brown, Eric Garner, Tamir Rice, John Crawford).

Media coverage, of course, doesn't help our broader understanding. Cameras pan tight on crowds of protesters, which makes them look large by removing any context around them. We see lots of politicians speaking at podiums, which is what politicians do when given the opportunity to get in front of cameras. We see plenty of insta-punditry to criticize politicians on the other side for saying the wrong thing, for saying anything, or for saying nothing at all. All of this, it seems to me, is 100% heat and 0% light.

In the last couple of days I have run across two items, completely disconnected from each other, that I think represent important but ignored ideas. They help pull back the cameras so we can think about the broader questions important to all of us: what kind of society do we want, and how do we get there?

The first is a blog post I had been meaning to read for some time, titled "In Defense of Violence". The blogger writes a variety of thoughts about the use of force and self-defense, topics near and dear to my heart (as readers of this blog will know). But most importantly, she makes a central observation that lies at the root of many of the problems in our current national conversation (paraphrasing here from her article):

This is true both for police violence as well as for civilian violence. We're actually badly divided within ourselves as a culture - we both deplore and worship violence. In the case of police, we take government use of force as a "professional" matter rather than what is should be in a democratic society: a universal concern for all of us. Police shouldn't write their own rules of engagement; they should hold to rules written by society at large. Certainly they should have input into those rules, and I've seen police with some extremely thoughtful ideas on the subject. But police forces themselves answer to us - they can't be the final word.

Likewise, we have a bizarre relationship with guns and violence in the hands of civilians. John Crawford is dead because he picked up a pellet gun from a Walmart store and carried it casually, which someone apparently found threatening enough to summon police and which the police apparently found threatening enough to shoot him for. Tamir Rice is dead because he was carrying a pellet pistol. In other parts of the country, gun owners take great pride in openly carrying weapons (real weapons!) in public places and stores, and they don't get shot. Yes, race matters here. So does class, and so does local culture. In a country as large and diverse as ours, we have to expect local differences. But the range of those differences shouldn't include innocent people being gunned down, by police or anyone else.

So we need to have a serious conversation about violence and its uses by civilians. I've blogged before about guns and self-defense (posts too many to mention; here and here are a couple to start with). But that conversation is stuck in a quagmire of memes and bumper-sticker slogans and a lot of shouting by the rabid few. If the "In Defense of Violence" post has a point, it is that we need to take that conversation back from the self-interested ideologues and talk seriously to each other as people - not as "liberals" or "conservatives" or anything else.

The second item that sparked my thinking was from one of the many ideological talking heads "contributing" to the ongoing "debate" about police violence and the protests in NYC, Ferguson, and elsewhere. In this case, an avowedly conservative show (The O'Reilly Factor) trotted out an avowedly conservative commentator (Ben Carson, who happens to be black) to defend the police against attacks (both physical and verbal). You can see a synopsis and a link to the interview here. But what really caught my eye was this particular snippet by Carson, which the Fox News site picked up in the summary and the headline:


"The community has to recognize that a thug is a thug. When people do bad things, there are consequences," Carson said.

This struck me because of something I've been wrestling with lately: a framework in which, rather than "picking a side" and dehumanizing the people on the other side, we can engage in conversations with people we disagree with, about serious and even tragic subjects, while continuing to recognize the humanity of each other. The phrase that keeps coming to mind: each of us is a Child of God.

By this I don't mean something primarily theological, or even theologically coherent. What I am looking for is a mental frame of reference in which I can continue to recognize the worth and humanity of every person, whether I agree or disagree with their thoughts or actions.

Carson's glib bumper-sticker statement, of course, runs in completely the opposite direction. He wants to put white hats and black hats on everybody so that he can defend the virtuous and punish the wicked. I guess it must be comforting to play God like that. But I think it's the wrong approach.

To be clear: there are people in the world who, despite their humanity and inherent value, will try to hurt others unjustly. Some of these people are civilians, and if they're lower class we call them "thugs". Some of them are wealthy and wear suits and they usually get treated pretty well, even when the damage they cause is far more widespread than any thug could dream of. And some of them carry badges and wear uniforms and are called police officers. None of this should be surprising - if you change clothes and circumstance, some people will still do bad things to other people.

But if we actually want to things to get better - if we want to work towards a society where fewer police are killed in the line of duty, and where fewer civilians are shot by police, and where fewer people are terrorized and assaulted by either strangers or those close to them - we need to stop pretending that we can draw neat boxes around people and label some of those boxes "good people" and others "bad people". We need to treat violence and the use of force seriously - not as some Hollywood fantasy exercise and not as something that can be contained to only a few. We need to acknowledge everybody's legitimate need to live in peace, and think about what we do when that is violated - by anybody. And above all, we need to listen to the collected wisdom of many centuries: treat others, and view others, as we ourselves would be treated and viewed.
Posted by R. William Ayres at 12:59 PM 1 comment: