Are Racism and False Accusations of Racism Equal Problems?

I was struck by a cartoon circulated on the internets today: 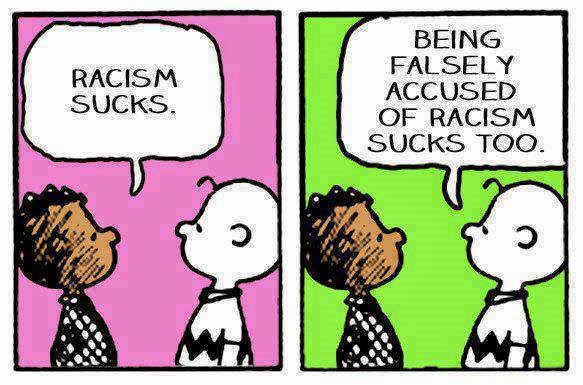 This appears to be a classic case of "argument" by false equivalence. Both statements are true, in a sloppy linguistic sort of way. Racism does suck, and being falsely accused of it sucks too.

But surely these things aren't the same? Racism runs the gamut from brief social encounters to deadly violence. But for those who experience it, it is a constant and life-altering force. Read, for example, this piece written for CNN by an educated black professional living near (but not in) Ferguson, MO. Even minor forms of racism, repeated day after day after day, can ruin a life.

On the other hand, if I (being white) am falsely accused of racism, is that going to ruin my life? Will it happen to me every day? Will it make me wonder whether my children will come home safe at night? Am I likely to be killed because of a false accusation of racism? In all likelihood, a false accusation of racism in my life would lead to an uncomfortable day or two until I have a chance to explain myself and reconcile with my accusers. And even if I am unsuccessful in that, I will likely leave the incident behind and go on with my life largely unchanged.

So why engage in this kind of false equivalence? I can speculate but I really don't know. I suspect that, at root, this is a classic example of dog whistle politics. It's not really a message intended for me, because I'm not in the tribe this is speaking to. And like all tribal messages, this one isn't concerned with logic or argument - it's about identity, in this case an exclusionary identity more interested in circling the wagons than in engaging with people outside their own boundaries. It's the kind of speech that divides rather than unites.

Why is Police Use of Force Different from Other Violence?

Another year, another month, another week, another killing of an unarmed young man in America. Other bloggers (Will Moore in particular) have been much more diligent about covering excessive use of force by police than I have. But the incident this week in Ferguson, Missouri has ignited a national conversation, at least briefly.

That conversation has gone in a number of directions, all of them important and meaningful. There is, of course, the race relations problem - Ferguson is an overwhelmingly black town with a nearly all-white police force, and many black residents have indicated that they have faced harassment from their "own" cops of years. A generation after the Rodney King riots, it is a national tragedy that this problem remains with us.

Then there are the twin problems of excessive force and over-militarization within the police. Scads of photos from Ferguson showing police with assault rifles, helmets, body armor, and large armored vehicles have been plastered across the internet. Some sites have stacked those photos side by side with photos of the US military in Iraq and Afghanistan. The visual similarities are striking, making Ferguson look to the world like a war zone. "Is this what we want our police to look like?" is an appropriate and urgent question. "Shock and awe" was designed as a means of warfare for distant lands, not a means of keeping the peace in American suburbs. Clearly there's something badly out of kilter here.

What I haven't seen much about yet - probably because we're waiting for facts to emerge from an impartial investigation - is an understanding of the actual shooting death of Michael Brown. The few facts there are seem to be undisputed:

- Brown was unarmed at the time of his killing.
- Brown was walking down the street, during the day, when he walked by a police car.
- Brown was killed by multiple gunshot wounds, including one or more to the head.

As a student of interpersonal violence and self-defense, I struggle to imagine ANY scenario under which this is OK for the police officer involved. This seems like a gross overreaction to almost any conceivable "threat" this young man might have posed.

This is where I am left baffled. Every year there are numerous incidents in which police shoot and kill unarmed people and are determined, by police inquiry, to have operated within "proper police procedures". In many of these cases, the victim dies of a great many gunshot wounds, often fired at some range. Police will say that they were operating within their standard procedures - which suggests that the rules and procedures themselves are the problem.

I'm willing to accept that police, because they put themselves in harm's way to protect the community, may be given some latitude that the rest of us don't have. But how much? And shouldn't they be accountable to the public, both for what those rules are and for how they are used?

I can only imagine that, whatever the nature of the opening confrontation between Brown and the police, there were several ways to deal with it that didn't involve the drawing of a firearm. Why are THOSE not "common police procedure"? Introducing a deadly weapon, as every self-defense instructor I know will tell you, should be the absolute last resort. Yet some police, like Ted Nugent and Wayne LaPierre, seem to think that guns in the hands of "good guys" can solve all problems. Where is the NRA now?

Ultimately, I don't really have the right words about this tragedy. An encounter that started out as, at worst, a modest verbal conflict ended in someone brutally killed. That is wrong, wrong, wrong, no matter what kind of bureaucratic crap you slap on top of it in the name of "professional policing". Clearly, at least in some places, our police forces have gotten a badly skewed notion of what force is supposed to be for. Perhaps it's time that we as a society took that decision back, both from "professional police" who are too enamored of their military toys and from gun-culture folks who think the solution to everything is to threaten to shoot it.
Posted by R. William Ayres at 10:16 AM No comments:

Imagine a land in which two groups exist side by side. They don't mix much and increasingly segregate themselves and live among their own kind. Each has a narrative about the evil of the other group, how the other is out to destroy everything worth fighting for, and how there can be no real co-existence. They may inhabit the same space, but they are worlds apart.

Sound familiar? This could describe the current conflict between Israelis and Palestinians. Or between eastern and western Ukrainians. Or Shiites and Sunnis in Iraq.

But it's also here in the United States.

True, we don't have people shooting each other in the streets. And the majority of Americans don't really think this way. But there are some among us who do - members of our own society who have drawn their own identities in so extreme a fashion that their rhetoric looks a lot like Hamas, or the rebels in Donetsk, or the leaders of the Islamic State.

Who are these Americans? They exist on various ends of the ideological spectrum. But today the loudest, most vocal, and most numerous are hijacking the title of "Conservative". And they are becoming increasingly shrill.

To be clear, the majority of Americans who identify themselves as conservatives don't think this way. But there is a minority - a splinter group, if you will - who are working hard to hijack the label. And like all revolutionaries, they will turn on their own kind as readily as on their ideological enemies.

This is an identity battle fought to a large degree in social media, the great public conversation of our day. Here are a couple of recently-circulated examples: 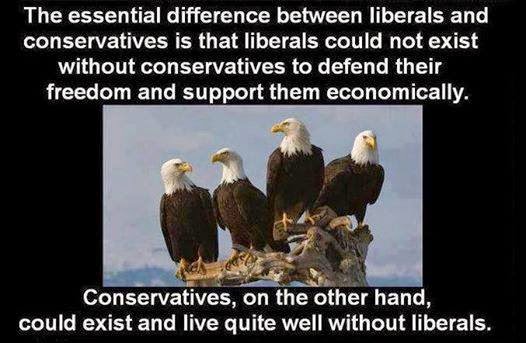 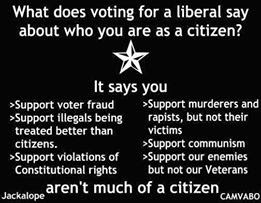 The message here isn't subtle. For these to make any sense at all, you have to believe that there are "Conservatives" and "Liberals" in the same way that there are "Israelis" and "Palestinians", or "Sunnis" and "Shiites" - that is, that these are essentially fixed groups with nothing in common. Both memes are broadly and vaguely disparaging, the latter in the kind of screaming-tantrum-at-the-top-of-your-lungs sort of way. Really, I'm surprised there isn't a Hitler reference in there somewhere.

If you happen to identify as a Conservative who thinks along these lines, and you've read this far, your reaction might be, "Hey, Liberals do this too! Why aren't you picking on them, you commie?" Recognize that "the other guy does it too" is the defense of the three year old who knows he's wrong. Grow up.

I don't much care about whether people hold conservative or liberal political ideas. I have found many times that when people engage in real dialogue, they often find that they have far more in common than otherwise. And I know many folks of various stripes (but of late, especially conservatives) who have abandoned politics because of precisely this kind of rhetoric.

We are, or ought to be, better than this. We are not Palestine, Ukraine, or Iraq. One of the great contributions of the United States to the world in the last 200 years is the ongoing experiment, however fitful and imperfect, in creating a national identity out of so many different kinds of people. The folks who spread the memes above apparently want to undo all of that, and return to some kind of "purer" politics where only they and their ilk are in charge. When they see "E Pluribus Unum" perhaps they think it means "I'm right, you're wrong".

Whether you engage in this kind of rhetoric in the name of Conservatism or Communism is immaterial. It is the one kind of politics that is fundamentally un-American.

So if you're passing this kind of nonsense unchallenged (or even approvingly) on social media, please stop. You are neither better nor worse than your fellow Americans. And "they" are not the Enemy. Walt Kelly was right - we have met the enemy, and He is Us.
Posted by R. William Ayres at 10:03 AM No comments: