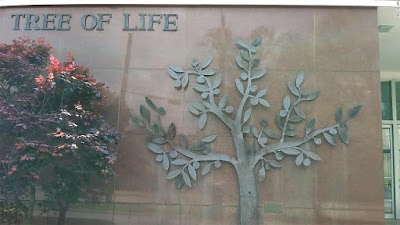 My son and I sat on the first floor of the Tepper Building, a brand-new, state-of-the-art academic facility on the campus of Carnegie Mellon University. We had come for an admissions presentation, part of the formal pageantry of a college visit. We had just taken a quick walk through the campus, and were looking at a map and chatting about things I remembered from my youth. I grew up in and around this place, and it was interesting to see how the university has grown and changed. We were looking forward to the campus tour following the presentation.

The first floor of Tepper looks out on Forbes Avenue with big floor-to-ceiling windows. We watched as an ambulance went by, lights flashing, siren blaring, speeding up Forbes to the west. It's a city, and in that part of town there are hospitals everywhere. We thought nothing of it, and kept chatting.

Thirty minutes into the admissions presentation I got a text from my father: Police working on active shooting at Shady & Wilkins (Tree of Life). We hear 7 casualties. Be careful.

I know that intersection, that synagogue, instantly. I grew up in that neighborhood. Some of the kids on my school bus were probably members of that congregation. I could see it in my mind.

We read about mass shootings all too often in the news. But they are usually somewhere else, in some other place. For most of us, they are theoretical events, things to argue about with talking points and, in our present era, partisan rancor.

This was home - my home. The Tree of Life is perhaps a 20 minute walk from the CMU campus we were visiting. It's 15 minutes from my father's home, and 5 minutes from the campus where my stepmother teaches. It's a place I'd been past thousands of times in my youth, walking to friends' houses and the shops in Squirrel Hill. To Mineo's, and Games Unlimited, and Famous Frank's.

After the admissions presentation, a CMU staffer came out apologetically and explained that the campus was closing all events for the afternoon. There would be no campus tour. I checked in with my parents and we headed back out of town, shocked and disappointed and not sure what would come next.

It's hard to comprehend the level of hatred, anger, and rage that would cause someone to stockpile guns and ammunition, walk into a house of worship, and kill people in cold blood. To be so far outside society that you will fire on police, on the elderly, on anyone in your path. That's a heavy lift when it's a largely theoretical exercise, an event among strangers in a strange place.

For me this is harder, because it's so close. We were right there. We watched the shock waves ripple across the city in real time.

One thing we do know: this kind of wanton violence is born in anger, in rage, and in hatred. We know that these things are grown over time, cultivated in dark places on the internet and in small groups. We know that they are nourished by the broader zeitgeist. Hatred draws sustenance when hate becomes mainstream. Anger grows when anger is all around.

There is no direct line here, no way to draw a clear connection between a particular speech and a particular act, any more than we can connect one cloud or one weather front with a particular tree in the forest. But the atmosphere, the environment, matters. Plants grow when conditions in the environment are supportive. Anger and hatred flourish when the same is true.

So it matters that we have a President for whom anger and hatred are daily tools. It matters that people openly sell, and wear, t-shirts that revel in violence at political rallies. It matters that abuse (both verbal and physical) aimed political enemies and out-groups has become so commonplace that no one bothers to comment on it anymore. We have created a hothouse of anger in our society. We should not be surprised at the fruit it yields.

To my conservative friends: yes, there are people on the left contributing to this problem. Hillary Clinton's "basket of deplorables" comment was a horrible thing to say. Eric Holder's "when they go low, kick 'em" was worse, even if he later explained it away as a metaphor. There are those on the left who have been calling to "fight fire with fire", arguing that anger must be met with anger. I'm getting tired of being told that I should be outraged all the time.

But none of that excuses the President, or the Republican Party, which has been gleefully throwing fuel on this fire or looking the other way when their allies do. "Fine people on both sides"? Scare stories about "rapists and murders" "pouring" over our southern border? Full-throated defenses of "free speech" without the slightest care or concern about what freedom is for? Politics has gone from being an effort to win elections to an effort to annihilate the other side, to create a "pure" society where only the "right-thinking" have a place. Sound familiar?

In the face of Saturday's culmination of a horrible two years of growing anger and hatred, I wonder whether there is any bedrock left on which we agree. Once, we agreed that violence was out of bounds in politics and society. At moments we have crossed that boundary, but we have at least agreed in hindsight that those were our worst moments.

Can we agree on even that much anymore? Can we agree that our public conversation has become so toxic that it is breeding and unleashing killers? I wonder whether we can, because to agree on the problem is to agree that we are part of the problem. When our national leaders boast of never apologizing or admitting to any fault or mistake, how can we take even the first step on the road back to peace?

Paul wrote about the "fruit of the Spirit", the outward signs of God's desire translated into human terms. In the letter to the Galatians he wrote, "the fruit of the Spirit is love, joy, peace, patience, kindness, generosity, faithfulness, gentleness, and self-control".

You don't have to be a Christian, or a person of any faith, to agree that a society based on love is better than one built on hate. That peace is preferable to violence. That generosity is better than selfishness. That in the moments when we are at our best, we are kind and generous and patient.

I used to think that these things were the bedrock on which we build our society. Politics is usually about what we disagree on, but these are things on which we all agree. We all, I thought, wanted roughly the same kind of society, we just disagreed about how to get there.

Now I wonder if I was wrong. There are clearly people who want a very different society, one that is selfish and violent and angry and divided. Many of these people now occupy positions of prominence in our government. And many millions vote for them, apparently wanting the same.

What, then, to do? Be patient and kind and generous and faithful and gentle. Celebrate love and joy and peace. Be citizens of the society we want.

If enough of us agree, we might be able to move our society in this direction. It won't be easy, and it won't happen quickly. But in the face of Saturday's horror, it is the only response I can find that makes sense.
Posted by R. William Ayres at 9:06 AM No comments: