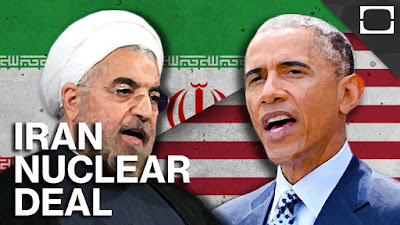 With President Trump apparently about to "de-certify" Iran's compliance with the agreement on its nuclear program, there will be a great deal of discussion about the details - what does de-certification mean, what does Congress have to do, what sanctions can be reimposed, what does this mean for US alliances, etc.

I want to step back from all of that and look at this from a broadly simple negotiation perspective. For all of his vaunted experience as a "dealmaker", it's not at all clear that the President understands negotiation at all, at least not in the international realm.

At issue is Iran's desire to develop, and possibly deploy, nuclear weapons. The incentives Iran has to do so are strong, perhaps overwhelmingly so:

1) The United States, the single most powerful military on the planet, has repeatedly declared the Iranian government to be an enemy.

2) The 2003 Iraq war demonstrated that the United States is quite capable of waging preemptive war, without reasonable pretext, against states it perceives as enemies. Iraq did not possess any significant WMD capability at the time, and the US knew this.

3) The ongoing crisis with North Korea shows a different outcome. North Korea, like Iran and Saddam Hussein's Iraq, is more or less permanently on the US' list of enemies. But North Korea does possess nuclear weapons, and is rapidly developing the ability to deliver them widely. It also possesses a significant conventional deterrent against something the US cares about (South Korea).

4) Israel, Iran's most implacable foe, possesses nuclear weapons and has no significant powers in the region to deter it.

From Iran's point of view, the desire to possess a nuclear deterrent simply to insure the regime's survival is entirely understandable. It is also the case that regime survival tends to be at the top of every country's list of priorities - meaning there is nothing else as important as that goal.

In light of this, if the US goal is to stop Iran from developing a nuclear weapons capability what are the available options?

1) Preemptive war, a la Iraq 2003. This option is so costly as to border on the insane. Beyond Iran's ability to close the Strait of Hormuz (thereby shutting off 20% of the world's oil supply), the ability of the United States to successfully invade and overthrow the regime in Tehran is debatable. Iran is large, with a large and nationalistic population, and its geography is varied. It is not Iraq, which is flat, internally divided, and by 2003 had been weakened by 12 years of crippling and universal international sanctions. Oh, and Iran can inflict casualties in Israel and can engage in MUCH worse behavior with regard to terrorism than it currently does.

2) Sanctions. As Trump has pointed out in the case of North Korea, these don't work very well. Sanctions can serve to constrain a regime's resources, but you can't keep the regime from allocating the resources it does have. Iran's economy, even under sanctions, is vastly more robust than North Korea's (there is always a market for oil). There is no combination of economic or diplomatic sanctions which the United States can administer, especially unilaterally, which outweigh the strategic value of a nuclear deterrent to Iran. Hopes that sanctions will cause pain to the people, who might then pressure the regime to change its path, are likewise fantasies. The nuclear program enjoys widespread support among the Iranian population - they have reasons to dislike their government but this isn't one of them.

3) Diplomacy. The only remaining path is to reach an agreement with Iran whereby it agrees to voluntarily forego nuclear development, presumably with significant safeguards and verification of its behavior. In order for any such agreement to be viable, the Iranian regime must believe that the benefits of such an agreement outweigh the benefits of pursuing nuclear weapons. Trump keeps railing about how we "gave up too much" in the existing deal, but I don't know why he thinks we could have given them less and still had them agree to it. Perhaps he doesn't understand the concept of sovereignty, or the limits of the US ability to inflict punishment on the Iranian regime.

Those who are eager to scrap the existing deal either don't understand any of this, in which case they are likely to be very disappointed in the outcome of that action, or they are seeking something else entirely. There has been concern in the past that there are those within the US foreign policy establishment who would welcome a pretext to wage war with Iran, and who might therefore be interested in re-creating the 2003 formula. I can't say for sure what Trump thinks (if, indeed, he thinks anything at all). All I am sure of is that one of these two things must be true.

Talk about "denying Iran all paths to a nuclear weapon" are ludicrous. If North Korea can develop one, Iran certainly can. They have nuclear technology, generations of nuclear scientists and engineers, and the ability to obtain and refine fissile material - all without the help of Russia, which is likely to want to help, at least under the table. Claiming something does not make it so - something this administration seems disinclined to understand.

None of this bodes well for the region or the world. If the Trump Administration follows through on this course of action, we will likely end up with yet another nuclear standoff. Iran may well renounce the NPT altogether, as North Korea did some years ago. We may move closer to the re-creation of an Eastern Bloc, this one based not on Communist ideology but on a desire by a set of authoritarian regimes (Russia, Iran, China?) to band together to balance against the US. The world will not be more peaceful, and nobody will be safer or more secure. But this and future administrations will have yet another nuclear-armed bogeyman to use as a useful foil in domestic politics.
Posted by R. William Ayres at 1:29 PM No comments: