What We Don't Know Can Hurt Us: Higher Education Edition

The old saying has it that "what you don't know can't hurt you". I believe that we are living through an era in which what we don't know about each other is hurting all of us, because that lack of knowledge fuels unnecessary conflict.

This is absolutely true in my industry of higher education. Universities all have varying levels of conflict, of many types. One of the most common is conflict between faculty and administration. Much of this conflict is unnecessary and stems from a lack of knowledge.

I have been reminded of this in many ways in recent weeks, but most proximately by a social media post from a friend which read in part:


My school has an "enrollment management" office with a multi million dollar budget that seems to go up every year. I have no idea what the hell they do, and why that money is spent, especially when my scholarship and other support dollars are at an all time low and will not go up anytime soon. Meanwhile, enrollment at the university as a whole has gone down, and continues to plummet, even while [our department's] enrollment grows each year. ... Bureaucrats will multiply and take all the money, meanwhile, people in [our field] will continue to connect and develop life long meaningful relationships.

My concern, as is often the case, is the characterization of the faceless "they" and the conflict which this needlessly perpetuates. The post above has a few problems caused by a lack of knowledge:

1) The budget of the enrollment management office in question has been going down, not up. The phrase "seems to go up every year" hides the fact that the author doesn't really know, but suspects. Often times, what we suspect to be true isn't. In this case, the office in question has been pushed to do more and more with less and less, just as (perhaps even more than) the academic departments have. And unlike some faculty, nobody in the enrollment office has tenure - many can be (and have been) fired.

2) The phrase "I have no idea what the hell they do, and why that money is spent" is honest, but conveys a suspicion that those efforts are wasted. Not knowing should be an occasion for either humility or research, or both. Negative speculation is harmful.
In this case, the work of enrollment management is extremely difficult. If it were easy to control enrollments, more universities would do it - most except for the very elite struggle with this constantly. Moreover, the university in question has historically under-invested in marketing itself (an assertion which faculty might dispute but which in fact holds up under scrutiny if you take the time to look comparatively and to understand how marketing works).

3) The claim that "[b]ureaucrats will multiply and take all the money" is both broad and inaccurate. The contrast with the second half of that sentence reveals a broader narrative: faculty are the ones doing the important work of the university, whereas "bureaucrats" are wasted money whose work does not contribute to the education of students or the health of the university as a whole. Professional staff see these comments and know this attitude is out there.

Again, to be clear: faculty DO very important work. I agree that the work that faculty do directly with students is THE work of the university. It is in those relationships that education happens.

But it is also true that without the work of the "bureaucrats", the work of the faculty would be impossible. There is a vast amount of effort that goes into recruiting, admitting, housing, advising, scheduling, and providing for the needs of that student before she ever reaches the classroom. Most of this work is invisible to both students and faculty, as it should be. Ideally, all of this is as seamless and efficient as possible.

But seamless and efficient does not mean free. And while I believe that everyone within a university, at all levels, should be accountable for the quality of their work, the conflicts that arise between faculty and administration often aren't about accountability. They're about tribalism, about them being "them" and us being "us". They are always wrong, and we are always right. And because we are always right, I don't need to know anything about them, because they are wrong anyway, so why learn?

This is the very essence and root of our conflict. Yes, there are disagreements over interests and policy directions and so forth. But if we really understood each other, if we understood how things work on "the other side", and if we ceased doubting (or assuming) each other's motives, the concrete disagreements would be vastly easier to resolve.

Now that I have the position I do, I have few avenues to make these kinds of arguments. Faculty at many institutions are allergic to being "told what to do" by administrators, even if all we're saying is that we would like to develop a common understanding of how the world works. The narratives that drive these conflicts on our campuses are rooted in a fundamental mistrust about motives, but they are fueled and maintained by our steadfast refusal to learn more about each other. That's a problem we can fix - if we want to.

This is, of course, true in our broader society as well. I have previously argued that we don't really have an "America" anymore, but a feuding set of tribes that know less and less about each other. The antidote is always knowledge - not knowledge of facts so much as knowing and understanding people. We claim in our universities to be laboratories for solving society's problems. Perhaps we should start with this one.
Posted by R. William Ayres at 6:03 AM No comments: 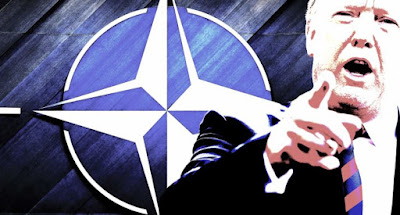 Over the last few days, Trump sowed chaos at the NATO summit in an unprecedented fashion. At the height of his extremity, he called on NATO members to boost their spending on their militaries to 4% of their GDP.

Nobody in their right mind would call for such a thing. Even the US doesn't spend that much, and the US outspends the next dozen or so countries on the planet combined.

Trump later appeared to drop that particular target, calling instead for the 2% target to be met immediately - after earlier signing a joint statement that called for meeting that target by 2024. Later, he mentioned 4% yet again, then dropped it again.

None of this makes any sense, if you assume that the President is a minimally rational human being for whom words and numbers have meaning.

But Trump is none of these things. He is not rational, in the sense that he does not select strategies that are aimed at achieving goals. He has said himself that he doesn't prepare, he "goes with his gut" - the very antithesis of rationality. He is driven by feeling, by instinct. This is many things, but it is not rational in the standard definition of that term.

News networks have been tying themselves in knots trying to make sense of these varying and contradictory statements. Some have taken the time to look up facts that clearly demonstrate that a 4% target is an absurdist fantasy.

All of this is a waste of time. When Trump says 4%, he doesn't mean what you or I would mean. He doesn't mean anything. He doesn't understand the numbers, doesn't know what the right number would be, and doesn't care.

So let us not waste our time arguing with facts that are obviously and absurdly wrong, or policies that are obviously beyond the bounds of reason. None of this is about policy. It's about a man on the world's biggest stage trying desperately to convince everyone (or maybe just himself) that he has all the answers, and that everyone else is wrong.

God help the rest of us.
Posted by R. William Ayres at 8:31 AM No comments:

Why the Administration's "Advice" on Affirmative Action Doesn't Matter 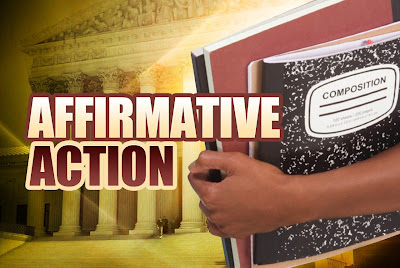 There is lots of concern on the left about this recent headline story:

As someone who works in higher education administration, this is the least concerning thing the Administration has done in months. There are several reasons why this isn't worth our time and attention:

1) It's pointless as a symbolic gesture. I've heard it argued that one reason why folks on the left are upset about this is the symbolic message is sends, that the Administration is hostile to the rights and welfare of minorities. I would have thought that referring to neo-nazis and white supremicists as "fine people" was more that sufficient to make that point. As a symbolic message, this doesn't say anything Donald Trump hasn't been saying for decades.

2) It's non-binding advice. The "guidance" in question doesn't change the law, or the boundaries of the law. There may be a message in here about what this Justice Department is or isn't willing to argue in court cases that may come up, but again we already knew that (see #1 above). Otherwise, this just amounts to a set of suggestions that universities are free to do with as they please.

3) This only applies to institutions that are selective enough for these kinds of things to matter. If you only read the New York Times, you would get the impression that higher education in the United States consists of Harvard, Stanford, the University of Chicago, and a few other schools here and there. But the reality is that genuinely selective schools are only a very, very small slice of the higher education landscape. Most schools, public and private alike, are desperate enough for students that they will happily accept as many qualified students as they can find, even as they also want to admit diverse groups of students. The number of schools that might conceivably turn away a white applicant in favor of a black or Latino one is extremely small.

4) Because of #3, we need to understand that this isn't about creating a more racially just society in any broad kind of way. This is a rich people's argument, because only the very well-off can afford to send their kids to the kinds of schools for whom these sorts of decisions are relevant. Yes, every year Harvard or Yale or Williams or Stanford will let in a handful of minority students on full ride scholarships. That number is a fraction of a drop in the bucket. For the vast majority (95%+) of minority families who pin their hopes on higher education to lift them out of poverty, their kids aren't going to go to those schools. They're going to go to regional public institutions for whom this argument is irrelevant.

If you care about a more racially and economically just society, and if you believe that higher education is a means to that end, don't spend your time agonizing about this "guidance". Focus that energy on getting your state legislatures to re-fund their public higher education systems, gutted and increasingly expensive after decades of budget cuts. Don't get distracted by red herrings. Focus on what matters.
Posted by R. William Ayres at 11:58 AM No comments: