Trump is Not the Problem 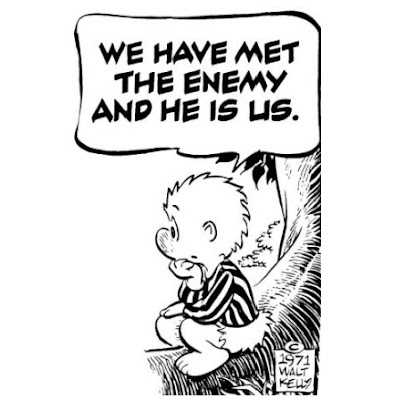 I know a lot of my friends will disagree, but I believe that President Trump is not the fundamental problem we face today.

Trump is a symptom of the problem, a product rather than a cause.

The problem is us.

I know that we're fond of, and prone to, sweeping judgments about the state of our politics. Everyone has a take on what the "real" problem is, and on the whole I tend not to put much stock in such arguments. But there are, I believe, fundamental issues that drive all of the others. And on one of these issues, I think we are very, very wrong.

I was reminded recently of a book I read back in college, E.E. Schattschneider's The Semisovereign People. At the core of Schattschneider's argument was this observation: that what happens in politics isn't determined by the power of the opposing sides, or by what they choose to do. It's determined by what the conflict is about in the first place.

What we see on a day to day basis is a parade of different issues - health care, tax reform, immigration policy, Russian meddling in American elections, protests during football games, etc., etc. Although these are all very different issues, with different details and differential impacts on different parts of the American people, they all have a sameness. They feel like they are all the same argument.

We subject ourselves to this kind of Groundhog Day politics because the community of "America" is largely gone. Far too many of us no longer care about America - which means, we no longer care about our fellow Americans. We care only about a subset of them - those who look like us, talk like us, support the parties or candidates or symbols that we do.

Years ago in writing my dissertation I stumbled on an insight: in any conflict, if one sides resorts to zero-sum thinking it will quickly drag the other side into the same morass. A Prisoner's Dilemma world moves from TFT-style mutual cooperation to mutual defection and conflict very quickly. It's not enough for some to want to be cooperative - both sides (all sides) have to agree, or the whole is dragged down to the lowest common denominator.

That's where we find ourselves today - the lowest common denominator of American politics. Richard Spencer and Milos Yiannopoulos wage a battle to "win" for their side, whatever the heck winning is, by cheating and abusing and pushing buttons and generally behaving in all sorts of barbarous ways our parents taught us not to.

The Trump Administration does the same, attacking anyone and everyone it disagrees with, disrespecting every institution and every rule it finds inconvenient, and generally acting like a bunch of barbarians.

The reason why the story about the agreement between the Clinton campaign and the DNC in 2015 has legs is that it fits this same narrative: do anything you have to in order to win. Republicans decry it as "crooked Hillary", but show me a Republican today who doesn't have that very same stain on their actions.

We are all becoming barbarians.

My research and writing over the years has helped me understand all of this, to see behind the surface to the next level of dynamics. But as author Noah benShea once put it, Reason explains the darkness - but it is not a light.

I don't know where the light is. There were times in the past when natural disasters and tragedies have brought us together as a people, at least for a little while. I remember the Mississippi floods of the 1990s, where for a time it seemed like Americans just came together as Americans and forgot our divisions. After Oklahoma City we saw how toxic a political cultural could become, and for a little while we turned our back on hatred and came together in honor of murdered children. I remember a time, too short a time, after 9/11 when we did the same. Even after Hurricane Katrina, though the Bush Administration took some abuse for its sluggish response, we all agreed that it was a tragedy and did what we could to help.

In the past two months we (the United States, we Americans) have been hit three times by major hurricanes. Where is the unity, the sense of shared purpose, the empathy? Still we squabble and argue and spit. Houston and Florida have been forgotten in the national conversation, while Puerto Rico is a sordid battlefield of childish insults and corrupt bargains.

I wrote a year ago, just before the Presidential election, that America is Dying. One year later, it has only gotten worse, and the trajectory has not changed. President Trump isn't helping, but neither is he the driver. We are destroying ourselves.

This will end when, and only when, we start to value our fellow Americans - all of them - more than we value our own selfish and tribal desires and wants. When we stop seeing every fight as an existential conflict which we must win or die. When we become willing to listen, and to bend, and to compromise because the relationships we have with one another are more important than the issues of the day. When winning matters less than people - than us.

To put it in theological terms: it will end when we learn to love each other again.

Posted by R. William Ayres at 3:04 PM No comments: