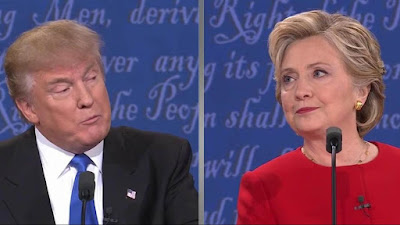 In watching the first Presidential Debate earlier this week, I was intrigued by the first half hour or so. The discussion, rather heated at times, focused on issues of economics: how we (government and/or society as a whole) can make the economy better, with more jobs, better wages, and rising prosperity for everyone.

What struck me about the candidates' exchange on this subject was not their policy differences. Truth be told, neither one offered much to actually answer the question, "How would you as President create more jobs?", and some time was spent actively evading questions like "How would you bring jobs back that have gone overseas?" If you were looking for solid policy proposals, it was not your night.

But what the candidates did say was quite revealing. While short on policy details, each candidate did make clear their views on how economics works. The contrast was remarkably stark.

In her opening answer to the first question, Clinton talked about cooperation and sharing - investing in workers, sharing profits, working together. The how wasn't there, but the basic idea was clear: economic progress comes from cooperation. Wealth is created by working together.

Trump's answer to the same question was all about competition. He talked about losing, about winning, about fighting. He framed the economy as us (the United States) against them (Mexico, China). He talked about jobs being stolen. In his view, the economy is a zero-sum game: either we win or they win. Whatever they gain, we lose. Jobs are a fixed commodity.

The thing about this contrast is that it isn't just a matter of differing philosophies or differing ideologies. Economics may be derided as "the dismal science", but a social science it is. Questions like, "what generates more wealth - cooperation or zero-sum competition?" are not philosophical quandaries, they are empirical puzzles with real-world answers.

In this case, in the broadest terms, the answer is clear. Zero-sum competition makes everybody poorer, both through lost opportunities ("opportunity costs", to economists) and through wasted and inefficient efforts. Cooperation, by contrast, generates wealth.

This is obvious from even a cursory glance at the history of human development. At every stage, wealth has increased where people have come together to cooperate in greater and greater numbers. If all we had was zero-sum competition, we'd still be living in small tribes throwing sticks at each other.

This is not to say that healthy competition doesn't have a role to play. But the vast majority of the interactions that drive our economy are cooperative ones. When we sell someone a good or a service, both sides come away better off - the provider gets money, the consumer gets something they need. That basic cooperation - the exchange of values - is the fundamental basis of the free-market system.

Economists disagree on many things, but this isn't one of them. There isn't a single economist anywhere who thinks that an economy based on the competition of all against all is a good idea. Indeed, the very notion of economic growth belies the possibility of zero-sum economics. How can we create new jobs and new wealth if all we're doing is passing the same jobs and the same wealth around?

On this issue, Trump is not merely misguided on policy, he's fundamentally wrong. He's like an astronomer trying to model the solar system with the earth at its center. The world just doesn't work that way.

This is one dimension of the presidential campaign that has both policy and moral dimensions. Policy driven by zero-sum economics will make everybody poorer. Insisting that the world is a dog-eat-dog place will make us morally poorer as well. Small wonder the world's markets regard a Trump presidency as a disaster of the first order.
Posted by R. William Ayres at 4:36 PM 1 comment:

I ran across this meme on my FB feed today: 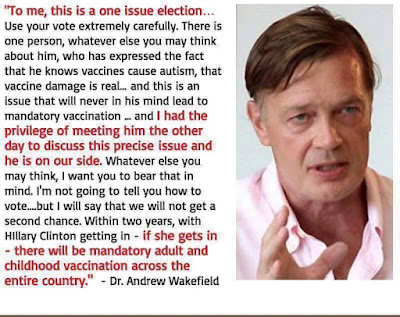 What strikes me as fascinating is not that Mr. Wakefield said these things, if indeed he did. One might be surprised that he is continuing to push this particular line after being so thoroughly discredited from his profession for doing so. But that's his affair, and in a way ego defense isn't very surprising.

I'm also not surprised that he has attached his cause to the US presidential campaign. That tends to happen with all sorts of issues - people who feel strongly about something try to tie themselves to one camp or the other in the hopes of elevating the status of their issue by attaching it to something more visible than themselves. So this is par for the course.

What I do find striking is that he apparently still has a following. Despite being thoroughly discredited, denounced, and stripped of his license to practice medicine in his own country (the UK), folks still believe in his message.

These same folks frequently talk about the need to "do your own research", and are often quite adept at using the internet and research databases to find scientific or pseudo-scientific works that support their point. Yet they do not read, cite, or credit the large meta-analysis studies that have examined (and discredited) vaccine-autism correlation, nor do they seem to pay any attention to half the feed that appears if you google "Andrew Wakefield" or if you read the man's Wikipedia entry.

Leaving aside the scientific questions here for a moment, the social science here is fascinating. Followers of Mr. Wakefield have constructed an entire alternative reality, complete with its own websites, its own documentary, and its own "research" and articles. The audacity of this alternate universe is far greater than that employed by those interested in what used to be known as "creation science". In that case, young-earth creationists were content to simply call for "teaching the controversy", standing their material up against the opposite view. Here, Mr. Wakefield's followers deny the legitimacy, or even the existence, of everything that doesn't support his views. All of it is held to be a vast conspiracy promulgated by multinational drug companies to profit from harming infants - a claim as breathtaking in its scope as it is unbelievable.

The level of cognitive defense required to maintain this view is really quite remarkable. It's one thing to say, hey, I think there's something to this, let's look into this further. It's another to wish away every last bit of evidence published over nearly 20 years in most of the major relevant scientific journals around the world. To continue to defend this position over time means not only violating the very "do your own research!" cry that Mr. Wakefield's followers are so fond of; it means sealing yourself off from most of the rest of the world on the one issue that you claim matters to you most.

I doubt that Mr. Wakefield's argument above is going to have any significant impact on the US presidential election, because I don't know that there are enough people in the US passionate enough about this issue to matter electorally. But the social behavior itself really is fascinating.
Posted by R. William Ayres at 2:19 PM No comments:

There Are No "Deplorables" 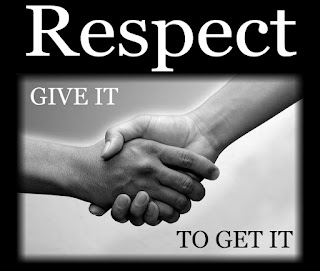 A couple of weeks ago Hillary Clinton made a comment at a fundraiser in New York to the effect that half of the voters supporting Donald Trump's candidacy belong to a "basket of deplorables". She included in this metaphorical basket people who are racist, sexist, homophobic, xenophobic, and Islamophobic, as well as other unspecified categories.

The comment was obviously bad politics, and Clinton suffered for it for a few news cycles. As one commentator put it: it's fine to denigrate your opponent, but never a good idea to denigrate the electorate (see "Romney, Mitt, 47 percent").

She was not wrong in the sense of getting the numbers incorrect. She was wrong for a much more basic reason: people aren't "deplorables".

People aren't Skittles, either. They're not "makers" or "takers", they're not Republicans or Democrats, "losers" or "rednecks" or "thugs".

Most of us, in practice, don't really believe this in a practical way. We afford dignity and respect to people who are like us, or people whom we sympathize with. It's good when we do so for people who have been denied respect, because denying basic human dignity is wrong. That's why Trump Jr.'s tweet about Skittles was so bizarrely offensive - he was making it clear, by equating human lives with candy, that some lives (Americans) are more important than others (Syrian refugees). "I might get hurt if I try to help you, so screw you - you're not worth the risk" was the basic message. And yes, that's racist.

Think this is only a conservative/Republican/Trump problem? Check out this meme, widely circulated in liberal circles: 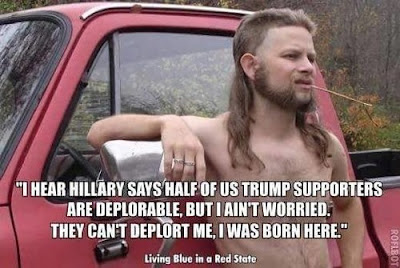 This hits a lot of classic stereotypes: poor, stupid white redneck with a pickup, no shirt, and hay between his teeth. It plays on a narrative of rural whites as morons, inferior to those of us who "know better". In its own way, it's as racist as the image of the hoodie-wearing urban black man - an object of ridicule and scorn (and often, of fear).

I'm not interested in offering advice or direction to either political campaign, or to voters. My point here isn't political at all, it's moral and theological. For those of us who claim adherence to the Christian faith, Hilary's "basket of deplorables" comment was as far away from the Kingdom of God as many of the terrible things that Trump has said. Because in the eyes of God, nobody is "deplorable".

This is one reason I have grown increasingly uncomfortable with the conduct of American politics. We don't disagree with our fellow citizens (or even our opponents), we demonize and dehumanize our enemies. The people that Clinton called "deplorables" are humans made in the image and likeness of God, just as much as the "losers" that Trump is so fond of talking about or the "Skittles" that Trump Jr. insists are poisoned.

The recent shootings in Tulsa and Charlotte have brought back to the fore this basic question: are we really treating all citizens with dignity and respect? It seems clear that the answer is "no", but for anyone who believes in the fundamental nature of human dignity that's not a liberal or conservative problem - it's a fundamentally human one. It's not a problem we will solve by continuing to demonize each other, much less by winning an election. If we really believe that all people are worthy of dignity and respect, we should speak and act like it.
Posted by R. William Ayres at 4:31 PM 1 comment: