There Are No Enemies 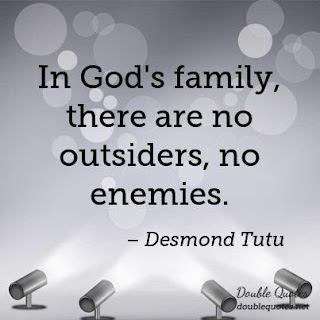 Back in July I wrote a post about "Enemies in Politics", taking what was a fairly easy shot at the pastor who said the invocational prayer at this summer's Republican National Convention. It's easy to call someone out for labelling members of the other party "enemies", and he was widely criticized for his remarks.

More recently, we've had another use of the word "enemies" in our political sphere, when the Maine Governor Paul LePage said this:


A bad guy is a bad guy. I don’t care what color he is. When you go to war, if you know the enemy, the enemy dresses in red and you dress in blue, you shoot at red. … You shoot at the enemy. You try to identify the enemy. And the enemy right now, the overwhelming majority of people coming in are people of color or people of Hispanic origin.

If you want to watch him say these things, you can see a video clip here.

Now, what Gov. LePage said was politically stupid - so much so that he is now considering resigning before the end of his term under a firestorm of protest. That's a pretty standard political story - say something stupid that angers a lot of people, pay a political price for it. His angry response to a state senator who called him out on it didn't help either.

Put another way: there are no enemies.

I'll say that again for emphasis: There are no enemies. "Enemies" are an illusion we create ourselves.

I'm hardly the first one to come up with this idea, though it's not common in the West. Morihei Ueshiba, founder of the art of Aikido and famous for his philosophy, had many variations on this theme:


Opponents confront us continually, but actually there is no opponent there.

People will immediately object, of course. "What about ISIS?", they will ask. "What about Russia? China? Terrorists? Weren't the Nazis enemies?" (Because Godwin's Law).

We live in a culture defined by enemy narratives. Almost all of our stories, our movies, our TV shows revolve around the struggle with enemies, "good guys" vs. "bad guys", black hats and white hats. There are exceptions, of course, but they are relatively rare. The Enemy Narrative is one of the most recognizable stories we have.

The problem is, it's all wrong. Or, put another way, it's all made up - a constructed story we tell ourselves about the world that hides and obscures more than it illuminates. We believe that enemies are real, that they really exist, just like trees and oceans and clouds are real. But they're not. Enemies are just people with labels we attach to them.

But what about people who attack us? Aren't they our enemies? If someone tries to do me harm, I'm not making that up - doesn't that make someone my enemy?

Imagine this story: I go out for the evening with my brother (who would, for the record, never do this...). We have dinner, maybe hear some music, walk to a couple of bars. He's feeling down about things in his life. Over the course of the evening he drinks too much, thinks about the wrong things too much, grows angry. Soon he's consumed by his anger and rage, fueled by alcohol. He bumps into someone, starts scuffling. I step in to restrain him, and he turns his anger on me. He lashes out to hit me.

Is he my enemy? Of course not. He's misguided, confused, and mistaken. Yes, he's trying to do me harm. But he's still my brother. And I will respond to him as such.

Now, substitute the word "neighbor" for "brother" in that story and it's a short step over to the question, "Who is my neighbor?" Those familiar with the Christian gospels know where that question goes. We are all neighbors, brothers and sisters, to each other.

Why, then, do we lash out at each other? Because we are confused, mistaken, misguided. Most conflict - maybe all conflict - is invented in our heads.

Much has been written in the study of conflict about the impact of a scarcity of resources. If there's not enough food to go around, people will fight over it. We will become enemies of each other quickly, in what most people would think of as "real" conflict with "real" enemies.

But there is no scarcity of resources. There is enough food, energy, water, and material for everyone on the planet. Neo-Malthusian concerns aside, we're not anywhere near the carrying capacity of our world. And if you look around at the conflicts in the world today, they're not really about resources. They're about some people wanting to control other people, because of ideology, religion, or a lust for power (or some combination of these).

During the Cold War, we used to argue in International Relations about whether the conflict was "real" or not. We had categories we called "spiral conflict" and "aggressor-defender conflict", and we argued about whether the Soviets were motivated by their own security (making it a spiral) or by trying to take over the world (making them a "real enemy").

But the argument itself was an invention. Yes, Soviet motivations mattered tactically, because they determined how the USSR might respond to various stimuli in the short run. But labelling them an "aggressor" and then claiming that the aggression made them an "enemy" wasn't an argument, but a circle of labels. No one asked, "why"?

This is not an argument for complete pacifism (a topic I've dealt with previously). If my brother is attacking me, I'm going to resist. I may even use force against him. But because he is my brother, not my enemy, I will use the least force necessary. I will do everything I can to keep him whole and unharmed.

Likewise, if a terrorist group is planning to attack us we should attempt to stop them. But in doing so, we should remember that, however confused or mistaken they may be, they are still fellow human beings. When Jesus called on us to love our enemies, this is exactly what he meant. If you claim to be a Christian and yet want to lash out in anger and hatred at terrorists (or Mexicans, or "thugs", or anyone else), you've got a problem.

Gov. LePage will not be the last politician during this electoral season to label someone else "the enemy". Partisans on both sides will do so, because the Enemy Narrative is a great way to mobilize your tribe and get them to go out and do things. Every time we do so, we dehumanize each other a little bit more. LePage isn't the cause of the problem, he's a symptom.

This brings me back to a frequent theme during election years: why I don't like politics. I would rather spend my time searching for peace and building better relations among people than waste my energy creating enemies that don't exist and fighting imaginary battles. There are so many better things we could do with our time, our resources, and our creativity. What a shame to waste them all on something that doesn't exist.
Posted by R. William Ayres at 3:09 PM

Email ThisBlogThis!Share to TwitterShare to FacebookShare to Pinterest
Labels: Christianity, Fear, Politics, Self Defense, Use of Force