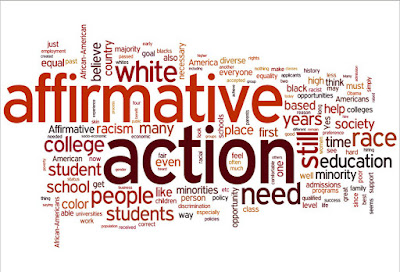 There has been a lot of buzz in the last couple of days about an internal Justice Department memo seeking lawyers for a new initiative to go after universities for "reverse discrimination" in admissions. This is an old conservative argument that claims, to whit, that white students (they now add Asians to this group) are denied admission to universities in favor of less-qualified black or Latino applicants.

In a country with thousands of universities and millions of university students, I'm sure that there are a few cases where this can be credibly argued to have happened. It is hardly an epidemic, or even a problem of any significant size, judging by the racial profiles of pretty much every university (outside the HBCUs) in the nation. On its face, this is a non-problem.

The political utility of the argument, however, is easy to see. It feeds a broader narrative of tribal white resentment. It also plays well to the more conservative philosophical point of view that everything is about the individual, that the individual is sovereign, and that when the rights of a single individual are trampled that's a terrible thing (though that argument seldom gets extended to individuals of color...)

Setting aside whether this sort of initiative within the DoJ is a good or a bad thing - people can form their own opinions on that subject - I can say from inside higher education that this effort, if it ever gets off the ground, will be far less significant than it might appear. There are relatively few institutions vulnerable to this kind of investigation. Most universities will be ignored, because admissions works very differently in different kinds of places.

The wealthy private elite institutions - the kinds of places that the NY Times writes about whenever it talks about "higher education" - have long ago insulated themselves from this charge by adopting very complex wholistic admissions practices. Race is but one consideration among many, and so much of their process is subjective that being able to credibly argue that any given student was turned away primarily because she is white will be impossible. Yale, Harvard, Amherst and Williams turn away thousands of students every year who are just as qualified as the ones they admit - that's the nature of the game. No investigating lawyer is going to wade into that world, because there is no victory to be had there.

Over in the public university area, the vast majority of public institutions are regional and desperate for students. Two that I have worked for, Wright State and the University of Toledo, will take any and all qualified applicants. They and a host of similar schools - Youngstown State, SE Missouri State, Millersville University, most of the SUNY campuses, Central Florida, and a thousand more - are enrollment and tuition-driven. The notion of having to select some students over others on the basis of race - or anything else - is irrelevant to these schools. When you're admitting all qualified applicants (and often, many who are marginally so), there's no danger that you're discriminating against anyone. Keep in mind, too, that these schools are where the vast majority of university students in the United States go.

That leaves only two classes of schools - small second and third tier private schools, and public flagships. The former are unlikely to be targeted in part because they, too, tend to be enrollment and tuition driven and are therefore less selective than their elite counterparts, and in part because nobody outside of their immediate area has heard of them. Regardless of the merits or demerits of affirmative action processes, any investigative effort is going to want to go after universities or colleges with national name recognition, because they're trying to make a political point. No investigator is going to focus on Lebanon Valley College (sorry, LVC!) They and several hundred of their brethren can rest easy.

The for-profit sector, of course, is immune to this kind of charge for the same reason regional publics are - they'll take anybody who qualifies to get in and is willing to pay (or borrow). Phoenix doesn't have an affirmative action problem.

That leaves only the flagship public universities like Michigan and UT-Austin. It's no coincidence that the major affirmative action cases in the last two decades came from those two schools. These schools, and a handful of others around the country (Ohio State, Missouri, Alabama, Georgia, Florida or Florida State, Ole Miss, Penn State, Minnesota, UW-Madison, etc.) have enough cache and status that they get a lot more applicants than they can accept. They do care about diversity (which, according to the Supreme Court, they are allowed to do), and they do take race into account. Because of the Fisher case and others, all of them have long ago adopted admissions procedures that stay well within the boundaries of what the court says is Constitutionally permissible.

So we're really talking about a small handful of universities here - maybe 30 in all - that are potential targets of any kind of DoJ effort. And all of them have spent years making sure that their admissions processes can withstand legal challenges. They don't get caught up in the kind of accusation leveled against UT-Austin so many years ago.

In other words, this "effort" is unlikely to affect 99% of America's universities, and it is unlikely to actually change much even in the few that might be targeted. This is pure symbolic politics - sound and fury signifying nothing, to borrow from the Bard. To my colleagues in higher education: don't panic. This, too, shall pass.
Posted by R. William Ayres at 8:55 AM