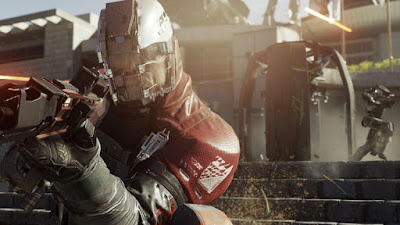 In the wake of recent school shootings, one of many diversionary culture-war issues has resurfaced. Public officials (like the Lt. Governor of Texas) and interest groups (NRA) have resurrected the claim that "violent video games" are to blame for children shooting up our schools. See, for example, this article:

The basic claim is that, by immersing themselves in realistic first person shooter environments like Call of Duty, impressionable young minds are turned towards wanting to do the same thing in real life.

If you're interested in this as an empirical hypothesis, there's plenty of evidence - all of which points in the direction of zero relationship. Millions of people (adults and children) play these games, and the percentage of those who actually shoot people is vanishingly small. No correlation has been found between playing these games and violent real-world behavior. Process studies of human psychology can't find anything that would link the two. On the basis of facts, evidence, and conclusions about how the world really works, it's clear that anybody pushing this claim is not interested in reality or truth.

All of this is old hat. What's interesting to me is that by focusing on video games, politicians and gun lobbyists are unintentionally opening a much larger can of worms. There actually is a point buried in this claim - it's just not the point they think they're making.

Video games, whether realistic like Call of Duty or fantastical like Legend of Zelda, tell stories. They differ from movies, television shows, books, and plays only insofar as they allow the audience to participate (to some degree) in how the story goes. They are essentially the same thing.

As video gamers know, there is always a pathway to follow. The game designers lay out the narrative they want, and you follow along. If I play Batman: Arkham City, for example, I can succeed in defeating the bad guys or I can fail to do so. What I can't do is "solve" the puzzle of the game using non-violent means. I can't negotiate with my foes, or engage them in meaningful dialogue to find out what they want and whether there's a joint solution. In Call of Duty, I can't call in the State Department to use diplomacy as a means to end the conflict. Violence is the solution.

To be fair, there is a separate genre of video games that doesn't follow this structure. These games are more focused on solving puzzles, or exploring environments, or growth and change. There's some fantastic work in that field. There are also gradations: Mario Brothers has "boss levels" and a narrative around defeating a villain, but it's not the same as Call of Duty.

In this regard, these video games are sharing a narrative incredibly common to our culture. Most of our movies - including many of the most popular - are based on this same narrative. TV shows are much the same: they set up heroes and villains, and the story is resolved when the former defeat the latter. This is true both of stories based on violence (Liam Neeson's "Taken", for example) and those based on shaming and embarrassment (think "Revenge of the Nerds").

Like most folks, I enjoy some of these stories myself. I'm a big fan of the Marvel Universe (movies and TV shows), which essentially tells this same story over and over and over again. I understand the appeal, and I don't think it's ubiquity makes individuals into real-life killers.

What it does do, however, is define the cultural air we breathe. All hero-vs-villain stories are zero-sum games. The villain is evil, the hero is righteous, the end always the same. When we apply these narratives to our own lives we are always the hero, never the villain.

I see this play out in the professional workplace all the time. You would think that beat-the-bad-guys narratives wouldn't have anything to do with an institution that supposedly has a common mission, staffed by people who are among the most educated in the world. Yet this is precisely the story that people live out all the time. As one college president recently pointed out, there's a whole literature of faculty-vs-administration narratives (see here for one recent hyperbolic example). I know a number of people in various positions who spend much of their time and energy not seeking common and cooperative solutions to our institution's problems but finding fault and looking for ways to defeat their enemies. Call it Call of Duty: University Edition.

President Trump, of course, represents this narrative personified. For him, everything is a battle to be fought and won. From his public statements and behavior, it appears that he cannot conceive of a world that might operate differently.

To borrow Alex Wendt's famous article title, our environment is what we make of it. When we tell ourselves stories about overcoming villains by force (whether that force is physical, verbal, or organizational), we convince ourselves that that's how the whole world works. We see villains everywhere, dragons to be slain.

Except that, in our own minds, we are all heroes. Our narratives don't line up. We create the things we claim to hate (conflict, anger, fear, violence) when we try to impose our narratives on others, and when they do the same to us. Unlike our movies and TV shows, there is no conclusive ending, no "peace in our time".

So while it's not true that video games turn 17 year olds into school shooters, it is true that we live in a culture saturated by violence of all kinds. We have forgotten that there are other stories, other ways of being. And so, like a nation of Don Quixotes, we tilt at windmills, imaging ourselves vanquishing ogres and wondering why others seem to intent on running themselves into buildings.
Posted by R. William Ayres at 8:51 AM

Email ThisBlogThis!Share to TwitterShare to FacebookShare to Pinterest
Labels: Stand Your Ground, Use of Force, Violence