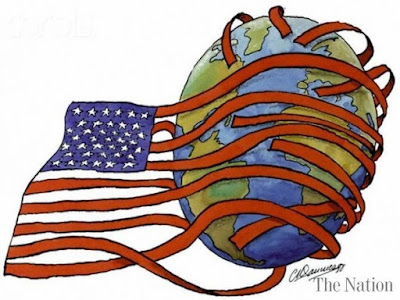 When I was in graduate school, we spent a lot of time studying theories of international politics - how the world works at the macro level. The dominant theory of the day was Ken Waltz' structural realism, which purported to explain how a bipolar system (two superpowers, the US and the USSR) could be so hostile and yet produce a world without major war. The historian John Lewis Gaddis picked up this theory and used it in his seminal work The Long Peace.

But while structural realism and its major competition, Keohane's neoliberalism, were all the rage, I was always drawn more to an offshoot of the realist world - hegemonic stability theory. Robert Gilpin's War and Change in World Politics, penned in the early 1980s, seemed to me to offer a better explanation of the Cold War. The superpowers were clearly not equal; by the 1980s it was clear that the US was far superior to the USSR in every category save one: the destructive power of its nuclear arsenal. On this, and this alone, were the two sides equal. But in terms of alliances, economic strength, prosperity, and the influence of "soft power" (Keohane's contribution to the discussion), the US was clearly way ahead.

Gilpin's theory postulated that world stability comes when a hegemon - one clearly dominant power - establishes order and a set of rules for the international system. Those rules are plain to see, and are embodied in the many structures built up after WWII - the UN and its Security Council, the IMF, the World Bank, and the GATT (which eventually became the World Trade Organization). Later we added to these the World Court and the International Criminal Court. All of these structures were, for the most part, written up by Americans - in part to make a better world, but in larger part to make a better world for the United States. Because that's what hegemons do - they write the rules of the world to advance their own interests.

The United States, moreover, seemed to have pulled off a singularly historical feat: it wrote a set of rules for the world that benefited not only itself, but also others. Anyone who agreed to play by those rules could participate and prosper*. Those that refused those rules - as the communists of the USSR did, preferring their own - were left out.


* An argument can be made that the prosperity afforded to others was limited and, to some significant degree, racially biased. It is true that chunks of the world were still exploited and left out of opportunity - though the causes were complex. Suffice it to say that the rules written by the United States were more open and inclusive than those of previous empires, even if they were not perfectly so. Africa has not faired well, but South Korea, Brazil, Turkey, and a number of others have.

Gilpin pointed out that the stability thus produced by a hegemon and a stable set of rules would last only so long as the hegemon could maintain its position against potential challengers - other powers that aspired to be hegemon themselves in order to impose their own rules. The Soviet Union was one such challenger, and not a terribly good one. It eventually drove itself into the ground in the effort. The end of the Cold War ushered in an era in which the US has, until recently, been largely unchallenged as the dominant world power.

Challengers do have a structural advantage: they don't have to pay the costs of maintaining the international system, whereas the hegemon does. Eventually, Gilpin argued, that structural advantage would cause a challenger to catch up, leading to a systemic war that would produce a new order - either the hegemon would reestablish itself, or the challenger would upend the existing order and take over. Either way, a new period of stability would then ensue.

Gilpin also pointed out that internal politics play a role, particularly within the hegemon. Because the hegemon has to bear the cost of maintaining the system, it's entirely likely that over time it will grow weary of spending the resources necessary to keep its position. The longer stability lasts, the more people will take it for granted as "the natural order of things", and forget that stability takes effort to maintain. The US did a good job to some degree of sharing those costs (the creation of NATO, for example), but there have been "burden-sharing" debates for decades about whether the US is "paying too much" to "be the world's policeman".

Into this world steps Donald Trump, who understands none of this. As many (supporters and detractors alike) have pointed out, he views the world in very transactional terms: every interaction is a separate, independent event producing a winner and a loser. These interactions appear in his worldview to have no connection to each other. He is the embodiment of Robert Axelrod's early experiment in multi-player prisoner's dilemma (though he obviously never read that article).

Viewed in this way, a trade treaty with South Korea (for example) has particular terms which favor one side or the other (the possibility that both gain is not entertained either - Trump's worldview is clearly always and everywhere zero-sum). The possibility that we might be willing to give something (or gain less) in this one interaction in order to gain something else in another arena (say, security cooperation and basing rights) does not occur to him. "Issue linkage", long a staple of American foreign policy, has been banished. In Trump's view, we must "win" on every single issue, or else pick up our marbles and go home.

The possibility that we might be willing to give up something as the cost of maintaining the international order is completely foreign to this President. Trump assumes that the United States is the dominant power, and the world is structured the way it is, because - divine right? Providence? I don't think he has any idea, because he's never asked the question why the world is the way it is. He is oblivious to the costs that the US has borne over the last 60+ years to establish and maintain the world that he has grown up in.

And so Trump is seeking to stop paying those costs, not because he wants to change the world but because he doesn't understand the consequences. He is like the homeowner who wants to rearrange the walls in his home without first asking which walls are bearing the load of the upper floors. In his view, it is better for us to keep and hoard our money than to spend it maintaining a system that clearly benefits others (as well as us). In his own words, doing so makes us "losers" and "suckers".

This is exactly the kind of behavior that Gilpin predicted 30+ years ago - that the hegemon will eventually grow tired of paying the costs of system maintenance, thereby hastening its own demise as the dominant player. In seeking to "Make America Great Again", Trump is actually moving in the opposite direction, driving the United States towards second-tier status on the world stage.

He does so, unfortunately, at a time when there is a real and viable challenger in the world: China. The Chinese government has made no secret at all of its desire for hegemonic dominance, and its plans for getting their are fairly plain to see. It will take some time, but that is the direction they are pushing in. As they move up, the United States is rushing downwards to meet them.

This, I suspect, is the source of much of the "resistance" within the Administration to Trump himself. Nearly everyone else in the government - certainly Jim Mattis, John Kelly, Mike Pompeo, Dan Coats, and their many underlings - understand American power and how our place in the world is maintained. This is not the "deep state", nor is it necessarily the "steady state" - it is simply the state, the natural outgrowth of two generations of foreign policy development in the United States that has always been more bipartisan than it appears.

What the result of this will be is yet unclear. The Trump Administration is young, and already faces resistance to Trump's apparent desire to chuck the role of hegemon and withdraw from the system we built. The midterm elections will matter, as will the next Presidential election. If Trump is just a blip, a future American President could restore the United States to its usual course - one that might forestall, or better manage, the growing conflict with China. On the other hand, if Trump gets his way then we may see a substantial rewriting of the rules of the international order - and not in America's favor.
Posted by R. William Ayres at 8:31 AM