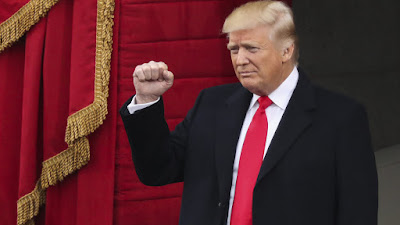 There are plenty of things to respond to in President Trump's inaugural address last Friday. Having read the text of every inaugural since Harry Truman (all easily available online), some simple observations jump out:

• It was remarkably short.

• It was not particularly uplifting nor inspiring. This is obviously something of a judgment call, but I have read inaugural addresses by Presidents whom I liked and agreed with and by Presidents I disliked and disagreed with strongly. Pretty much all of them were good pieces of inspirational rhetoric, whether I liked the President or not. This one wasn't.

• The phrase "American carnage" was bizarre. The America that Trump describes is not one that most Americans experience.

• I had no idea that schools are "flush with cash" but leave "our young and beautiful students deprived of all knowledge." My local public schools, which my kids attend, do an excellent job of transmitting a lot of knowledge to my kids, and even though we live in a pretty affluent area even our schools aren't "flush with cash". I don't think his description fits a single school district in the country, much less the entire system.

• "America first" has a ring to it that troubles some folks. What I found far more disturbing was this statement:

Calling for total allegiance to the state is positively totalitarian and certainly un-American. I can't imagine where this came from, or what purpose it serves.


But beyond all of this, what I found fascinating about the address is the extent to which it illuminates Trump's fundamental view of the world. Trump's world is all about competition, all the time. All interactions, for Trump, involve winners and losers. Everything to him is zero-sum.

This is both inaccurate and profoundly amoral. Let me elaborate a bit on both.

There are indeed some human interactions that are zero-sum, at least on some dimensions. Negotiation over the price of a car or a house is inevitably this way, at least so far as that issue is concerned: every dollar I give up (as a buyer) is a dollar gained (by the seller). Of course, this works primarily for single-issue interactions, because as soon as I introduce multiple values I introduce the possibility of tradeoffs in which both sides can get some, or even all, of what they want or need. This is negotiation theory 101, and the fact that Trump (who claims to have written a book about bargaining) doesn't understand this says a lot about his worldview as well as his intellectual breadth.

More broadly speaking, the defining characteristic of human civilization is cooperation that produces greater benefit for all, rather than competition that takes from one to give to another. The creation of wealth, the functioning of markets, the social interactions that produce what we call "civilized society" are all predicated on the notion that we do things that benefit not only ourselves, but others as well. If we were all about competition, we would barely have descended from the trees.

It is true that many these interactions have both relative and absolute gains within them. Trump is clearly a "relative gains" kind of guy - if the other side is gaining more, even if he himself is objectively better off, he feels that he's "getting screwed".

Relative gains thinking always leaves everybody worse off. It was behind the wave of protectionist tariffs and trade barriers in the 1930's (Smoot-Hawley in the US) that drove the world economy further into depression. It was in response to this disaster that after WWII, American policymakers put forward the Marshall Plan and the reconstruction of Japan - arrangements designed to enrich Europe and Japan more than the United States, because that was the smart thing to do. The result was massive worldwide economic expansion that improved the lives of hundreds of millions of people. No people has ever gotten prosperous on the basis of protection.

In Prisoner's Dilemma, relative gains thinking on both sides leads to very poor outcomes - both lose. Absolute gains thinking leads to mutual cooperation and better outcomes for both. This is, to a substantial degree, a matter of mindset. The winning strategy in PD is Tit for Tat, which assumes that cooperation is possible and starts every interaction cooperatively. Trump apparently hasn't read Axelrod.

In addition to being a lousy understanding of human interaction, Trump's worldview is also deeply disturbing from a moral standpoint. If everything is about winners and losers, then there are no real limits. Ultimately any behavior is justified, if only it helps you or your side win. Restraints on behavior are for suckers, and each side should be expected to do everything in its power to "win" (whatever that means in context). Winning, in turn, is its own moral justification. Might (achieved through winning) really does make right.

There are philosophical systems that have argued this point in the past, but they are profoundly un-American. They are also deeply anti-Christian. President Trump obviously has only the most tenuous connection to the Gospel, despite throwing in a few awkward God references in his inaugural address, but his zero-sum mentality makes it clear that he has no real relationship with Christianity.

The direction of the Christian gospel is pretty clear on this point. "Greater love has no man than this, that he lay down his life for his friends." "Love one another as I have loved you." "Blessed are the merciful, for they will have mercy." "Do not resist an evildoer. If anyone strikes you on your right cheek, turn the other also." "Love your enemies and pray for those who persecute you."

The list goes on and on, of course. Even "us first" nationalism is difficult to sustain in the face of Scripture. At the beginnings of the Abrahamic story God promises that "in you all nations of the earth will be blessed", and Peter understood that "God shows no partiality".

I keep being confronted with the same question: for those of us who claim to be Christians, do we take this stuff seriously or don't we? Forget the Supreme Court, or LGBT rights, or abortion, or any of the other issues that Christians sometimes hold up as being "the" issue that justifies their choices. All of this is under Screwtape's "Christianity and..." - things we attach to God that become God. They are idols.

To view the world as Us vs. Them, to reduce every human interaction and every issue to a struggle to produce winners and losers, is an utter and complete repudiation of the Gospel of Christ. To follow a man who walks that path is to reject the injunction of Jesus' own prayer to God: Thy will be done. God's will is not for a world of conflict and strife. Why would we follow someone who wants to make it more so?
Posted by R. William Ayres at 8:56 AM