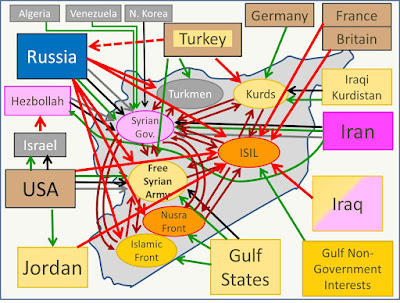 Amidst the long run-up to last week's somewhat anti-climactic missile strikes against Syria, a few folks raised a concerning specter: could a US bombing campaign lead American into a wider war?

For all the talk of a "new Cold War" between the US and Russia, we're nowhere near that point. The Syria case illustrates this nicely, and helps understand why Syria is unlikely to be the flashpoint for World War III.

First, even with the end of the Cold War in 1991 the United States and Russia remain strategic nuclear-capable states, meaning that each possesses the capability to threaten the existence of the other as a functioning society, and indeed to threaten life on the planet. Strategic nuclear arsenals have declined from their peak in the early 1980s, but both sides retain plenty of capacity to effectively annihilate the other.

What has changed since the Cold War is that the US and Russia no longer seek to actively destroy or overthrow the other. Putin enjoys messing with the West, but largely because he wants to create some breathing space within what he regards as Russia's sphere of influence so he can do what he wants. Today's Russia, unlike Stalin's USSR, has no grand ideology for taking over the world. Putin may be a local megalomaniac, but a global megalomaniac he is not.

Because of this shift, the US is no longer nearly as concerned as we once were that Moscow could try to destroy us at any moment. This used to be a real, if debated, concern, but there is no equivalent to the Committee on the Present Danger today - no more talk of Nuclear Vulnerability Windows and Strategic First Strike capabilities and the other sorts of things we used to worry about.

All of this is to say that, compared to the 1970s and early 1980s, the global superpower stakes are a LOT lower. If anybody wants to replace the US as global hegemon, it's China, and they seem content to focus on economics as a tool for doing so. They also have the good sense to stay the heck out of Syria, and indeed the Middle East as a whole.

So what does all of this mean for the US involvement in Syria? In the short term, we got through the strikes over the weekend without any obvious escalation. Trump, despite his proclaimed aversion to telling people what he's going to do, had telegraphed the attack for a week, so everyone had time to prepare. The US military also had plenty of opportunity to warn the Russians, who do have personnel and equipment on the ground in Syria. That warning was undoubtedly passed on to the Syrian regime, possibly lessening the impact of the strikes, but the whole thing was mostly symbolic anyway.

The fact that the US military can warn the Russian military directly in a theater of operations shows how far the two sides have gone to avoid direct confrontation, which neither of them wants. Syria isn't important enough to either side to consider risking a broader crisis, and unlike the Cold War era there's no "domino theory" today that would link a conflict in a minor regional state to an existential threat to the US.

There are only two things the US can do in Syria that could provoke a significant Russian military response. The first is to kill actual Russian soldiers (not mercenaries, whom all sides agree are on their own - the whole point of those forces, on both sides, is plausible deniability). If the US were to target a Russian facility and kill uniformed Russian forces, particularly in significant numbers, Russia would almost certainly feel compelled to respond in some way. Ongoing communication between US and Russian commanders in the area is a way to keep this from happening by accident, which so far has worked well.

The other thing that could produce a significant Russian reaction would be to directly threaten the survival of the Assad regime. Were to US to launch a truly massive bombing campaign, possibly combined with ground forces, that threatened to overthrow Assad and replace him with a more pro-Western alternative, we would be forcing Russia to make a choice: risk war with the US in order to protect their ally, or abandon their alliance and retreat. That's a difficult choice, given all that Russia has invested in the Syrian regime.

Luckily, it's a choice that Russia will almost certainly never have to make. Current US foreign policy, taken collectively, doesn't care nearly enough about Syria to try to alter the outcome of the Syrian civil war. Trump himself dislikes the whole thing and, now that ISIS is mostly defeated, wants to get the heck out. Others in the administration may have other views, but together they haven't been able to come up with a coherent Syria policy. In the absence of consensus on Syria, and given Trump's indifference to its future, it is extremely unlikely that the US will do anything that might push the situation towards a Russian response.

So much, then, for starting World War III. The other escalation axis people have been watching is Israel-Iran, but this too probably isn't going anywhere. Iran's support for Syria, while significant, is mostly through weapons and money, not Iranian forces on the ground. Iran doesn't like it when Israel bombs things in Syria, but there's not much the Iranians can do about it. Iran lacks a counter-deterrent to Israel's nuclear arsenal, and it lacks any other significant capacity to strike Israel except through terrorist proxies. As many scholars in my field have pointed out, proximity is a major factor in the likelihood of war, and Israel and Iran are not near each other.

Syria is a good example of how the most powerful state in the system doesn't always get its way. In this case that's because the US, despite its significant military advantages over all competitors, doesn't care as much as others do about the outcome. The American body politic is extremely unwilling to suffer any serious costs over Syria - Trump may be able to shoot someone on 5th Avenue and not lose voters but if he gets a couple thousand Americans killed fighting in Syria he may see his support cut in half. There's no agreement in Washington among foreign policy elites (of any party) as to what to do either. And so we dither and muddle along, while those with clearer goals and greater commitment forge ahead.

This is unlikely to change any time soon, and the end result is likely Assad remaining in charge of a significantly damaged Syria. On the way to that outcome, we can at least rest assured that this war is unlikely to spiral outward into a wider one.

Email ThisBlogThis!Share to TwitterShare to FacebookShare to Pinterest
Labels: Alliance Politics, Russia, Syria, US Foreign Policy, Use of Force, War